With participation numbers down across all states, NSW managed a team of 10 golfers to attempt to secure the Hornibrook Cup for the first time since 1988.

Our accommodation at West Lakes was very comfortable and the opening dinner was excellent, all set for another great week.

Monday’s game was at Victor Harbour, an hour and a half drive through some pretty South Australian country side. This course was impressive with the club house and fist tee on top of a hill with a view Garry Player described as one of the most awesome opening holes in world golf.

The weather was cool and clear with enough breeze to make scoring a challenge. The best score of the day was a 41 pointer by Queenslander, Peter Austin. Best for NSW were Allan Scully and Graeme Degnan with 32 points followed by Hillary with 31 points.

Tuesday was played at the West Lakes course, a more open and links style course with slick greens and very unforgiving rough for those who strayed wide. Scoring again was difficult with only a couple of players out of the 97 starters recording 36 points. Best for NSW was Garry Gibson with 35 points, supported by Barry Morcom with 33 points.

Tuesday night was the team dinner held in La Trattoria in Adelaide, a family run Italian restaurant which turned out to be very good.

Wednesday lay-day was begun at the Adelaide oval, with a tour of the place that provided heaps of information and sights. Lunch was at the Pink Pig restaurant which was very well received.

Thursday was a very windy day and all who had played Glen Elg before knew it was going to be a challenge. This course is one of the best in Adelaide and in the top 35 in Australia. This course is a classic, demanding dog leg holes long par threes, rough to die in and so many bunkers it did not seem fair. The wind took its toll with only four of the field playing to their handicap and most players feeling satisfied with a score in the late 20’s. Graeme Degnan grafted away with 35 point and Garry Gibson supported him with 34.

Once again the competition to take the cup was very close and went to Queensland for the second year running, followed closely by the Victorians and NSW coming in third.

The individual winner was Peter Austin from Queensland with a total of 106 points and the NSW Merl Cross Medal going to Garry Gibson with 97 points.

Congratulations go out to Peter Ewan, Frank Hayter and the South Australian team for organizing another great Hornibrook Tournament, and we now look forward the 62nd Hornibrook cup to be held in Sydney from October 11th to October 16th 2020. 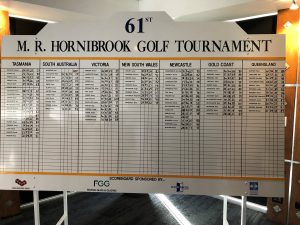 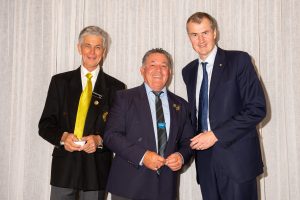 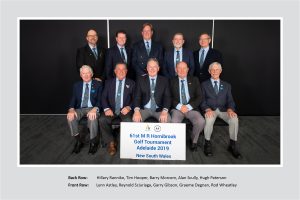