Perfect conditions were on display in Sydney for the annual competition against Newcastle.

It was great to be back at Pymble again after a few years off due to inclement weather.

A great roll up of 70 players, about 35 each, were on hand to battle it out for the impressive Sydney/ Newcastle Trophy, last won by the team from the North in 2015, a draw in 2016, and rained out last year.

With such a great course and excellent weather, the field set out for the shotgun start. All were impressed with this layout, especially the lads who were experiencing it for the first time. Most comments were around the severe second cut of rough which lines the fairways, certainly an effective way to toughen up a course.

The club house was buzzing after the game, everyone being very interested in the result of the main event. The two-ball aggregate match format provided a 6-all draw, and the decision was made by both committees to add the six aggregate scores to decide the title. It ended up 744 points to 718 points in favour of Sydney.

A great BBQ dinner and a chance to catch up with our Newcastle mates made for a top day out.

Thanks to the Newcastle committee for their assistance in organising this successful day and we all look forward to next year’s match.

Hope to see everyone at out next Sydney game, to be held at Stonecutters Ridge on Wednesday May 16. 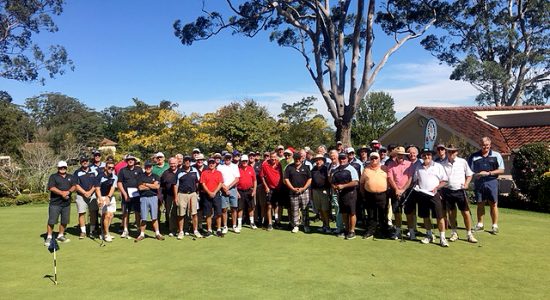 How to use MBA Golf to network within the construction industry